Doctors are investigating the case of a Winnipeg toddler with symptoms suggesting a rare, inflammatory illness potentially linked to COVID-19.

Doctors are investigating the case of a Winnipeg toddler with symptoms suggesting a rare, inflammatory illness potentially linked to COVID-19, the girl’s mother says.

The 21-month-old child is fighting to recover, even after she no longer tested positive for COVID-19.

The mother says health-care providers treating her daughter are concerned the girl may have developed Kawasaki disease or another, related condition called multi-system inflammatory syndrome in children (MIS-C).

Inflammatory syndromes can result from the body’s reaction to new viruses — not just the new coronavirus. But doctors in Canada, and scientists around the world, are investigating for a link to COVID-19.

Public health officials say no cases of the conditions connected with COVID-19 have been confirmed in Manitoba so far.

“Honestly, it’s just terrifying … Doctors don’t have the answers,” said the girl’s mother, who CBC is not naming due to concern about stigma.

The toddler’s parents didn’t know what to make of her symptoms. She had a red, puffy rash, vomiting and diarrhea, a tender abdomen and a recurring fever that spiked to 38.9 C (102 F).

“She refused to eat, barely had anything to drink,” said her mother.

Pediatricians they contacted were cautious about sending the child to a hospital, and told the mother to try Tylenol, thinking the girl had a flu.

On April 28, two days after the girl’s symptoms arose, the family learned the husband had been exposed to a co-worker who later tested positive for COVID-19.

They went for testing immediately, and blood work confirmed the toddler had COVID-19, the mother said. 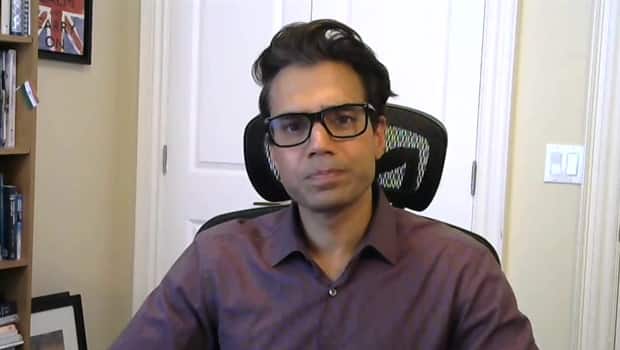 Dr. Samir Gupta said some children are showing symptoms of a rare disease that resembles Kawasaki syndrome, but it’s not certain that’s what they have. 5:53

At that point, Manitoba had fewer than 25 active cases of the disease and was announcing plans for reopening.

“It was absolutely devastating,” the mother said. “How could it possibly be COVID … with the cases being so low?”

A provincial spokesperson said since Kawasaki disease isn’t required to be reported in Manitoba, officials can’t confirm investigations into the illness in Manitoba.

The spokesperson said Manitoba pediatric infectious disease experts are in constant communication with specialists in Ontario and Quebec.

Hospitals in Ontario, Quebec, B.C. and Alberta are examining possible cases of MIS-C. Experts say the illness is difficult to diagnose and cases remain ill defined.

“There are way more unknowns than knowns,” said Dr. Rae Yeung, a professor of pediatrics, immunology and medical sciences at the University of Toronto, and staff pediatrician and rheumatologist at the Hospital for Sick Children.

“Right now, the big challenge is that there is not one diagnostic test … that can actually tell us whether a child has MIS-C or Kawasaki disease, [which are] all one hyper-inflammatory syndrome,” said Yeung.

When she’s not sick, the child in Winnipeg is “very chatty. She’s energetic, running around,” said her mother.

COVID-19 sucked that energy away as the toddler mostly slept.

Eventually, “she was only awake approximately three hours in a 24-hour period,” her mother said.

After she tested positive, doctors admitted the toddler to the hospital for treatment and testing to rule out anything else that may have been making her sicker.

Initially, doctors hoped her body could fight off the disease on its own, her mother said. But the family has been in and out of the hospital for weeks as her condition remained serious.

Last week, the toddler’s health took a turn for the worse. But on May 28, tests showed she’s now negative for COVID-19 and is fighting a new medical battle.

Doctors then raised the possibility of MIS-C or Kawasaki, the mother said, and will now begin further tests to help understand exactly what is making her daughter so ill.

“You just kind of feel helpless because you can’t make [your children] feel better,” she said.

“You don’t want to see them sick, especially with something so serious as a pandemic. You just wish you could take their pain away.”

The syndrome with many names

Yeung calls MIS-C “the syndrome with many different names,” because depending on where you are in the world, it might be called different things.

“I think this is part of the reason why it’s led to some confusion and a lot of anxiety, in fact, among not only families, but also caregivers and health-care professionals,” she said.

Much of what’s known about the disease remains hypothetical, she said, and research is needed to understand more. At its core, the syndrome can be characterized by inflammation, especially in blood vessels, caused by a hyperactivation of the immune system.

“What we’re seeing in all of these syndromes is hyper inflammation —  just an overactive immune system that’s gone into overdrive, affecting multiple organs in the body,” she said.

The illnesses in that family are triggered by a “tickle” to the immune system, Yeung said, starting with anything from strep throat to the novel coronavirus. The Hospital for Sick Children in Toronto documents roughly 100 to 150 cases of Kawasaki disease a year, she said.

But epidemiology in Europe, the U.S. and Canada has suggested a pattern, as cases of inflammatory syndromes in children emerge roughly four to six weeks following the peak coronavirus outbreak in each population.

Many, even most, of the children diagnosed w

Wasps’ place in Premiership final under…

Hit enter to search or ESC to close

Your shopping cart
WooCommerce should be installed and activated!